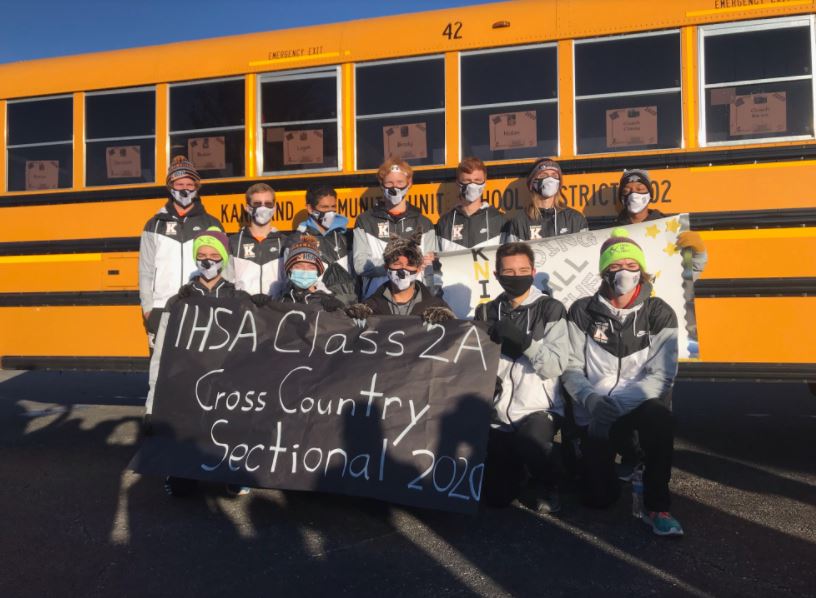 As Crystal Lake Central arguably had the best runners in the field, it was the Knights who took the field by storm and nearly flipped the script on the Tigers. CLC had not won a Sectional title since 1996, and for a storied program with many successes, it was their turn. We gave everything we had and wound up showing the field that we are indeed True Champions.

The format of three flights was new history for us as well. Not running in our usual packs made it very challenging to do what we do so well. Our goals of having small points in the last flight and the fastest fifth runner were achieved.

In the first flight of the day, Christian Phillips didn’t wait long to move out to the front of the pack and take over the race. Brady Babka wisely hung in with the chase pack and eventually broke loose. Each ran their race plans to perfection, with Christian pacing the gator that was filming him, all the way to a 16:36 effort on the graded hilly course. Babka clocked in at 16:56, again with a big Sub 17 effort. On this day, it would be huge.

The second race featured some very gutsy efforts by our seniors. With strong power from CLC’s 3-4-5, they were heavy favorites coming into the race to use that power and win big. All three, on paper, were to defeat our #3 scorer. Aaron Lodwig stuck himself right in the mix at the front of the pack through two miles, and heading to the final mile felt confident in taking the lead. With about a half mile to go, the CLC-led pack started moving forward and took a 40m advantage on the rest of the field at 400m to go. Parker Malone found an extra gear and incredibly wiped out that advantage in 300m, running half of it uphill.

On the final turn of the race, Parker had caught the lead runners and was preparing for another blistering finish. At the final turn, his shoulder caught the white PVC pipe flag and he was flung to the turf. Courageously, Malone gathered himself and completed his race with honor and grit, clocking in at 16:32 as our #2 runner, good for 18th place in the final standings.

Not lost in the battle, Lodwig and Logan Cunz continued to grind to the finish chute. Aaron grabbed 27th overall in the meet (16:46), with Cunz right behind in 28th at 16:51. All three were ahead of CLC’s #5 scoring runner.

In the final race of the season, Isaiah Dallal and Nolan Allen had the toughest job of all. Neither had teammates to key off for the run. This unique format for racing is contradictory to how our team competes and achieves.

Dallal had the goal of running with the pack of elite Top 10 runners and score some small points. Seeded 10th based on Regional efforts, Isaiah rose to 7th in the standings (5th in team scoring) and was the first finisher from our Regional in the field. His time of 16:03 was just two seconds off of CLC’s #1.

Allen had put himself in great position with the other 1-2s of the field at the half mile mark and held on to finish at 16:54, which also surpassed CLC’s #5 scorer. Nolan had the hardest job of the day in not having any other Knights to support him, and he battled valiantly throughout the run.

We took second by a score of 92-100. On the day, we could not be more proud of our boys who left all they had on the course. Although there isn’t a State Finals event this year, the second place finish would have qualified the Knights as a team for the 22nd time since 1986. Given the strength of the field of teams in this meet, and our pack’s success this fall, it’s not out of the realm of possibility that they would have been a Top 10 team finisher in Finals. Quite simply, we feel blessed to have had a season and have no regrets of any sort about how our year ended. This was an adventure, and we are most grateful for the time we had together to build another year of memories, stories, and results to savor.